As all residents should be aware, there is ongoing discussion regarding the Allegan County Drain Commissioner’s plan to execute repairs/replacement of the dam on Miner Lake. The dam is located in the South East corner of the lake and is the beginning of Miner Creek. 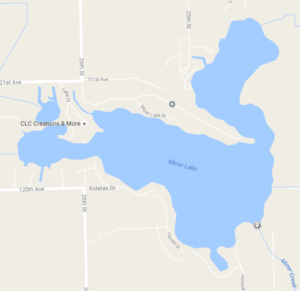 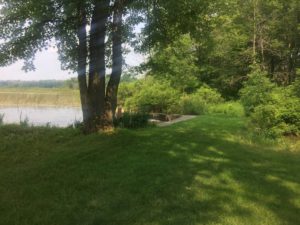 The current structure was installed in the 1960’s and consists of metal sheeting driven in to the soil to act as the primary water retention structure. The leading edge of the dam has a series of four inserts that can be removed to lower the lake to the winter level and inserted to return it to summer levels. 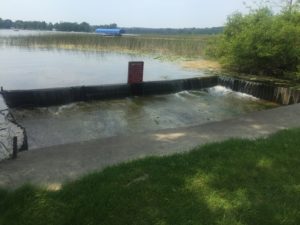 Water spills over the sheet metal and onto a rough concrete spillway. 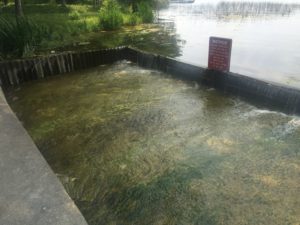 From there it flows through a series of metal tubes (culverts) and under a small land bridge. There is a concrete leading edge, but most of the structure is earth covering the tubes. 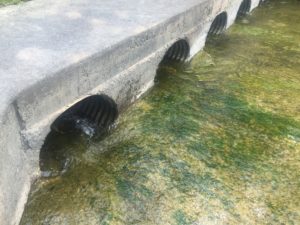 Originally the land bridge was required because a single property owner (Overton) owned the property on both sides of the creek and used the bridge to traverse the creek. In later years the parcel was divided with the creek as the property line. As such there was not a defined need for the crossing, but it remained because it was a integral part of the design.

Recent Evaluation of the Dam

In recent years, there have been some repairs made to the sheeting, but inspections in 2011 or 2012 indicted there was decay occurring within the metal tubes (culverts) and they were at risk of failure. If they failed, flood water could significantly erode the earth bridge and also the land at the corner of the sheet metal structure. If that occurred, the overall integrity of the dam would be in question and could experience wholesale failure. Additionally, the metal sheeting demonstrated general decay and thinning due to normal processes and was likely in need of repair.

Also of note is concern that the Drain Commissioner’s Office staff who remove and replace the boards are at risk of injury due to the amount of moss and other material accumulated on the concrete, making it very slick.

Based on these findings, the Drain Commissioner’s Office engaged an engineering firm (Fishbeck, Thompson, Carr & Huber) to evaluate and make recommendations.

Updated Design of the Dam

The engineers designs are included in the link below.

They recommended a design that continues to utilize a similar sheet metal leading edge, but they planned to make the structure a bit wider where it meets the land to provide additional support. They also recommended the removal and replacement of the metal tubes.

The design added a metal catwalk to allow staff access to the leading edge of the dam without having to wade through the slippery spillway when addressing the boards (lake level).

Additionally there was a call for a Rock Ford Crossing (installed stone on banks and creek bed) to allow passage through the water for equipment.

Separate from the discussion about the repairs to the dam, there has been significant controversy regarding the lack of easement for the county to access the dam. Originally the county had an easement across the Overton property, but at some point (date unknown to me) that easement was relinquished. This is agreed to have been an significant oversight on the part of the Drain Commissioner’s Office. In the years that followed, the property owners provided verbal permission to access the site for staff to address the placement and removal of the boards, but not permission to access with heavy construction equipment.

Early in the discussion about repairs to the dam, the Drain Commissioner’s Office sought two sets of easement.

Dave Dargis signed, but later objected because he was not informed this easement sought to install a new service road across his property and included the removal of trees and other impacts to the overall use/appeal of his property.

A few of the remaining owners on Stony Pointe did not agree to a new permanent easement and instead offered a temporary construction easement, provided any damage to the road and property was repaired. The Drain Commissioner did not accept this offer and pursued condemnation proceedings and a thus began a protracted legal process. Ultimately the matter was settled, but the Stony Pointe residents contend the final agreement was in essence what they had offered at the onset and the entire matter was a waste of time and money.

There is ongoing contention about the cost, stability and maintenance of the new road across the Dargis property.

The Drain Commissioner originally sought and assessment of approximately $1,220 per lake front parcel and half of that for back parcels. The subsequent delays, reviews, legal fees and changes to the plan resulted in the overall cost to increase beyond the allocated assessment. On August 1, 2016 the Drain Commissioner held an updated assessment hearing and the per parcel cost increased to approximately $1,600 per lake parcel (again half that for back parcels) paid over 10 years.

We are pursuing copies of the meeting minutes and official transcript, but at this time neither are published or available.

The leadership of the Miner Lake Association has purposefully sought to provide objective and unbiased views of the topics we present, so we will not provide much commentary here. That said, we are disappointed with the overall tone from the Drain Commissioner’s Office when dealing with the residents. Additionally, there are ongoing concerns about the overall cost of the project (exceeding $400k). A significant portion of those cost seem poorly explained and appear to be design and planning related. Residents have commented that the actual construction cost of the dam appear to be a fraction of the overall project.

We will allow residents to provide comments below regarding their opinions and concerns. Those comments will be unfiltered, provided they are civil.

We will be posting a separate notice regarding a meeting on August 11 before the Allegan County Commissioners to approve the updated assessment role and solidify the funding (taxes). The Drain Commissioner needs this approval to proceed. We recommend residents review the materials and attend the August 11 meeting (1pm Allegan County Complex).

If the funding is approved, construction is estimated to begin in September and last about 2 months. The contractor expects the work will not impact normal lake levels or use of the lake.

Again, feel free to comment below, comments will be quickly reviewed and then posted.